As an American who attends university abroad in Scotland, and currently is living in Spain, I have come into contact with multiple approaches to sustainable food consumption and differing food landscapes, as well as different interactions and approaches to one’s food. It must be realized that my locale and most of my interactions with food and produce in both nations is urbanised and does not represent the entirety of each nation. Many Scottish and American people live in much more agricultural and rural areas and come into different types of contact with their food. I also by no means intend to assert myself as someone with British or Scottish identity, but after living there for two years seek to share my experience with gastronomy in Scotland as a way of investigation and cultural comparison into sustainability and food with the United States. In this article I will draw focus to sustainable agriculture and personal contact with food as a way to evaluate and discuss sustainable gastronomy.

The United States is massive compared to most of Europe, its land area being 9,147 million km², compared to the land area of the European Union which is 4,238 million km². Furthermore, the land area of the United Kingdom is 241,930 km² with Scotland only at 78,352 km². The United States is over 9 million km² larger than Scotland, and this difference is almost impossible to imagine. For this reason there are obviously many differences in food landscape and food sustainability. I am from the state of Virginia and live in the Northern Virginia area in proximity to Washington, D.C. When in the United States most of my food shopping occurs in the supermarket or larger national brand corporations such as Harris Teeter, Safeway and Whole Foods. Different markets have different experiences, with Whole Foods focusing much more on organic produce and products with some local ones and Safeway and Harris Teeter existing as carrying national brands, non-organic items, a smaller organic selection and not offering specific local products.

In my local area there are also farmers markets on the weekends, where vendors from local bakeries and farms in Virginia, West Virginia and Pennsylvania come to sell their farm fresh produce and products, which often includes vegetables like lettuce, tomatoes and cucumbers, fruits like apples, melons and berries, meats such as chicken, pork and beef, as well as items such as eggs, breads, jams and honey. These items are directly from the farm and a consumer can be assured that their items are organic and fresh, while supporting the local growers and economy. However, my experience with farmer’s markets is lucky, as in multiple areas across the US they are much harder to come across. This can be seen in food deserts, which are defined by USDA as ‘parts of the country vapid of fresh fruit, vegetables, and other healthful whole foods, usually found in impoverished areas. This is largely due to a lack of grocery stores, farmers’ markets, and healthy food providers.’ It is noted that around 8.4% of the US population or 23.5 million people live in low-income neighborhoods that are more than a mile from a supermarket.

Water withdrawal is also an important factor to consider in the scope of sustainability, as it can lead to water stress or scarcity and can disrupt natural freshwater resources and ecosystems. According to the Food and Agriculture Organization of the United Nations, agriculture accounts for 69% of the world’s water withdrawal. Of total water withdrawal in the US, 40.22% is withdrawn for agriculture, where comparably in the UK 10.21%. However, it must be taken into account that the US is 8.9 million km² larger in land area and that the UK has 17.6 m hectares of agricultural land, whereas the US has 152.3 million hectares. However, the agricultural impact on water and its relationship to sustainability is still prevalent. Larger corporations and massive farms use up much more water and land than local ones and are more likely to disrupt the environment with pesticide use and their water withdrawal. 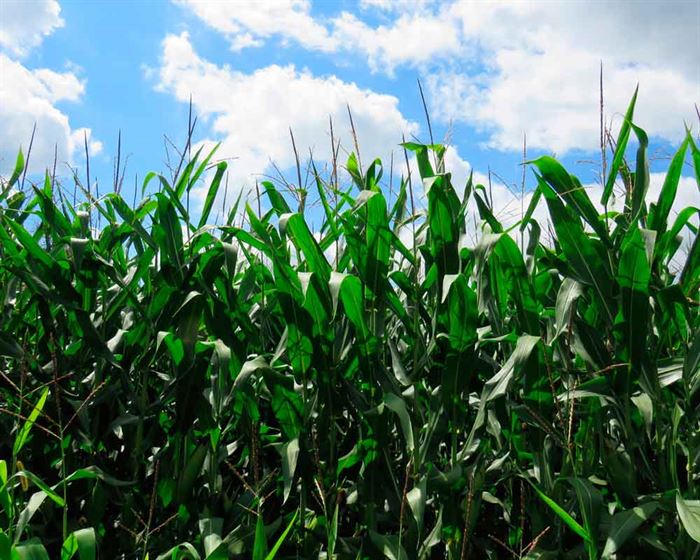 Photo by wisconsinpics from Pixabay

Buying local for sustainability, supporting the local economy and health benefits has become a movement in many parts of the US. The fact that a national grocery chain such as Whole Foods carries local products reflects this movement. Yet it should not go unnoticed that Whole Foods is much more expensive and contains a sort of elitist, bourgeois atmosphere and caters to wealthy Americans. The unfortunate reality is that organic and sustainable produce is more expensive as it is not mass produced, and that many Americans are not able to afford it. For most Americans, shopping for food takes place at more common and less expensive stores such as Walmart and Costco which often don’t carry any local or even organic produce. Measures by large brand corporations and the government should be taken to move them towards a more sustainable future, possibly by controlling their water withdrawal, pesticide use and ensuring biodiversity, to allow every-day Americans more access to sustainable products.

When one thinks of Scottish food what comes to mind of most is haggis, salmon and whiskey, or the more British dish of fish and chips. Many stores and restaurants contain dishes with these items but just as almost everywhere in our more globalised world, Scotland also contains many global cuisines, and not every Scottish person consumes these items. My experience with sustainability and food landscapes in Scotland is much less extensive than my experience in the United States. I live in the small town of St Andrews and do most of my shopping at a Tesco Metro which is tiny compared to the grocery stores in the United States I go to. There is a Morrison’s which is a large supermarket nearby, but it is more difficult to get to as I do not have a car and comparably Tesco is about a 3 minute walk from my flat.

This means that most of my food experience in Scotland comes from a small Tesco Metro, which is most definitely not representative of the whole of Scotland or the UK. I do find that in Tesco that they advertise and sell many ‘British’ products. As a national supermarket, Tesco sells much more local products in my experience than ones in the US. There are British strawberries, British beef, British chicken, British honey, British eggs, and other labeled ‘British’ items that often clearly label the origin within the UK that the product is from. For example, I have picked up a box of British strawberries and it states the origin as Fife which is the local county of St Andrews. Other times it is somewhere in England, but the availability to buy local produce under the labelling of ‘British’ is possible. The UK is also so much smaller than the US that a British manufactured or produced item could be considered a local product to all of the UK. ‘British’ products also tend to be around the same price or only one or so more pounds expensive than non-British products.

Compared to the United States, my experience in Scotland food shopping contains many more nationally labeled products. I am not sure what stores advertised before Brexit, but it can be plausible to assume that a push to consume British products and produce has possibly encouraged this labeling and availability, as if Brexit goes through foreign import prices will go up. I find that the access to local products in supermarkets and large brand stores is much more available in the UK than in the US, and that the local items don’t tend to be as overpriced as those in the US.

On the Food Sustainability Index, the UK is ranked overall as 24th out of 67 countries, two ranks above the United States. However, for sustainable agriculture on the Index, the UK is ranked at 55th, compared to the US which is at 33rd. Research shows that the UK is falling behind the world in sustainable agriculture. Looking at agriculture is essential to evaluating food sustainability as globally agriculture is the second largest contributor to to man made greenhouse gas emissions, making it a large contributor to climate change.

Our contact with food is essential to our lifestyle. What you eat has become a form of identity, whether it be cultural or political. Food and gastronomy is central to humanity and human values, it defines us, encourages creativity and allows us to experience our lives and the world through taste and flavour. Gastronomy is crucial to everyone in the world, and our contact with food and how this impacts our community and the environment needs to be considered more. To achieve more sustainable gastronomy in the world, more people need to be aware of their local produce and product production as well as their nation’s impact on global emissions. Buying local and obviously sustainable products is not an option for everyone, but simply being more aware and attempting some changes such as consuming less beef or even contacting local government may offer some solutions. Food is not the sole cause of climate change as most emissions are from energy from corporations and industry, but attempting to have more sustainable food will benefit in the forms of better health and in reducing one’s personal contribution to emissions.